HomeHB Blog: Online Marketing B2Beat1 On My MindWhy I Jumped Out of a Plane (and other Calculated Risks)

Why I Jumped Out of a Plane (and other Calculated Risks)

Why I Jumped Out of a Plane (and other Calculated Risks) 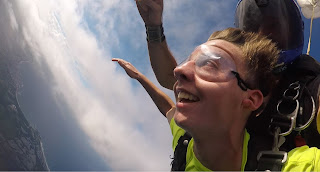 Mark Zuckerberg, the billionaire founder of Facebook once observed: “In a world that is changing really quickly, the only strategy that is guaranteed to fail is not taking risks.” Risk taking seems to have worked out pretty well for Zuck….and for many of you.

Most of you reading this post are entrepreneurs, so by nature you’re calculated risk takers. The majority of you advise people about investing large sums of money, so they trust your calculated risk-taking instincts. I also know that many of you spent the Holidays skiing. That’s definitely calculated risk-taking. More than a few of you like to race cars. That’s calculated risk-taking. But, so is driving down the highway, eating at a restaurant, even walking down the street or falling in love. With all due respect to those of you in the insurance business, you can’t protect yourself from every single bump on the road of life. Sometimes you just have to go for it and occasionally take your lumps. If you obsess about EVERYTHING in life that could go wrong or hurt you or embarrass you, then you might never get out of bed. You certainly won’t grow.
I’m not suggesting that you light yourself on fire, bet the mortgage at the casino or streak naked across the field of a sold out-football game. But, if you don’t force yourself to get out of your comfort zone once in a while—and start tackling that “bucket list” well before you’ve retired–then you’re just going through the motions and not living life. That might be the safer route, but it’s about as satisfying as taking a shower with your raincoat on.
Is sky diving safe?
I scratched a big one off my bucket list last week in Puerto Rico—skydiving with my son, Jake 10,500 feet above the Atlantic Ocean. Jake had just turned 18 and been admitted early decision to his first-choice college. His mom and I wanted to reward him for working so hard in the classroom, on the field and at the volunteer fire department where he trains. So skydiving was what he chose. Turns out even teenagers are making bucket lists these days. At the airfield, there’s a large poster of a bucket that you can sign, right before you pass through the last metal gate to get to the runway.
The 6-page release we signed included statistics about sky diving accidents. Out of roughly 3.4 million jumps in the U.S. every year, we learned there are typically a few hundred injuries and on average 19 fatalities. Statistically, those are pretty good odds, unless you’re among the unfortunate 19.
“Courage is the willingness to take the risk once you know the odds,” said renowned psychologist and author Daniel Kahneman. “Optimistic overconfidence means you are taking the risk because you don’t know the odds. It’s a big difference.”

I kept Kahneman’s philosophy in mind as our dinky crop duster of a plane huffed and puffed its way to the pre-advertised altitude two vertical miles above the tiny airstrip. I tried to ignore my doubts about the laid-back training session we had in a dusty hangar area where roosters, chickens and a limping bulldog outnumbered the instructors. I tried to ignore the memory of our pilot and instructors kicking the tires of the landing gear. After whacking it a few times with a wrench, they simply shrugged their shoulders and walked away.

Again, this “extreme” skydiving outfit was the only one on the island that had all the certifications and seemed to have the best online reviews. They had already charged our credit card, they had our signature in about 100 places on the release forms and I wasn’t going to wimp out in front of my son—especially after 2-1/2 hours of waiting.

In a mix of Spanish and Spanglish, instructors told us to check that our “toys were in the toybox” as they cinched the straps of our parachutes around our upper thighs. We practiced our “feet up” landing technique a few times, the cross-arm free fall position and then tried a few “Superman’s”–lying on our stomachs while mule-kicking our feet behind our backs so we could maximize our glide. So off we went. Straight up. Glad we opted to skip lunch.

At about 7,000 feet, we were above the clouds and told to squat execution-style to avoid hitting our heads on the low-slung roof of the plane. At about 8,000 feet, over the deafening roar of the wind and rattling engine, they did a final check of our chutes and harnesses. At about 9,000 feet, they told us to prepare to exit the plane’s tiny door left leg first, right leg second. At about 10,000 feet, they said to admire the view (“Admira la vista”). Then WHOOSH!

The door opens. You feel yourself getting literally sucked out of the plane into the open sky and watch your first-born son disappear like a speck into the stratosphere. You tell yourself to keep your wits about you, keep your arms crossed and your back arched during the initial free fall—6,000 vertical feet at about 125 miles per hour—with a few gut churning somersaults thrown in. Then shift to spread Eagle after the chute (hopefully) opens, enjoy the view and give a thumbs-up to the instructor who had cameras on his wrist and helmet.

It might have been helpful to know that our bored instructors would throw in some violent corkscrew dives and turns as we punctured the clouds during an otherwise gentle float back to Earth. But, where’s the fun (or personal growth) in that?

Despite the headaches and dizziness we felt over the next three hours, neither of us injured ourselves or lost our lunch or limbs during the landing. Better yet, we got the last jump of the day, just beating a fast approaching thunderstorm. While the word “AWESOME” is beyond cliché in today’s selfie-obsessed society, our skydiving adventure really was an awesome experience and provided some good father-son bonding time. Those of you with young kids will appreciate this someday.

Will Jake and I skydive again? Heck yea! Hooah!

Back at the hangar, I jokingly told one of the instructors that we didn’t get all that much instruction considering we were complete newbies to the sport of skydiving. “Dude,” he replied with a yawn. “We told you all you needed to know in the plane. People tend to black out during the free fall. If we told you anything else, you’d just forget it anyway.”

Conclusion
So, there you have it. It’s 2017. Let’s set some BHAGs (Big Hairy Audacious Goals) this year and show the world what we can do. And if we fall flat on our faces once in a while, let’s take it a step further and show the world how quickly we can bounce back and get back on our feet….even if you feel like you just fell out of the sky.

Our blog has more as does the FREE Resources page of our website.